Would nutrition labels work for news?

Would nutrition labels
work for news?

Matt Stempeck, research assistant at the MIT Center for Civic Media, once asked the question: “What If We Had a Nutrition Label for News”? 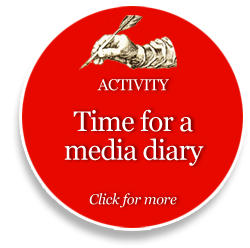 Good question. Anyone who can break down and communicate the nutritional value of news will be an American hero.

In a free press system like ours, it will never happen, but imagining a nutritional label on each news story is fun and educational. This spins off of Yahoo! CEO Marissa Mayer’s observation that the new unit of organization of news is the story, not the news outlet. Instead of buying a newspaper to get the package and everything that’s in it, we search the Web for a single news story that we really want to see.

Let’s say we agree that great journalism is the fair, accurate, contextual search for . Our nutritional system for news should evaluate stories on that basis. We can hunt down the fairness, the facts, the context and fundamental truthfulness of each story, just as you can their nutritional parallels: carbohydrates, protein, vitamins and the overall quality of being “real food,” full of fiber and all else that entails. We can also flip the formula — to evaluate unfairness, inaccuracy, contextual distortion and untruth with their doppelgangers, the sugar, salt, fat and additives that make food dangerous. 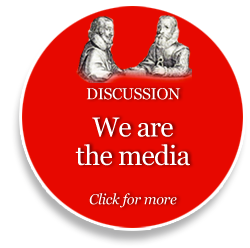 Breaking it down in this way would do for news nutrition what labeling has done for food nutrition: make it something consumers can understand.

Knight Chair Michael Pollan has pointed out that while we have had food labeling for a long time, we have in a sense negated it by allowing companies to market their products with flashy packaging that makes false food appear to be real. During the Nixon administration, a rule was dropped that had required the use of the word “artificial” on packaging of products that were not real food. The result: an explosion in processed foods. The slogan appeals to our feelings, the label to our intellect. The obesity epidemic suggests a lot of people don’t make it from the front of the package back to the label. Pollan says even those who read nutrition labels are going down the wrong road if they focus on vitamins without thinking about whether the food is actually the real stuff from the natural world the human species always has eaten.

We’re reminded, then, that information, while essential, may not by itself change behavior. You can’t just inform; you also have to engage. In “Switch: How to Change When Change is Hard,” writers Chip and Dan Heath popularize the metaphor of a person’s decision-making system being like a rider on an elephant. The rider is the thinking mind; the elephant is the emotional mind. When your rider wants to go one way but your elephant wants to go the other way, guess which way you go?

The Heath brothers say the secret to change is to find ways to reach the elephant. In West Virginia, this was done in a successful billboard campaign showing how much fat was in whole milk by using a giant glass of milk, an equals sign and five strips of bacon. Consumption of non-fat and low-fat milk increased.

What would that billboard look like if it were focused not on food but on news?

How much comfort news is in your information diet?