This really happened at the annual conference of the Investigative Reporters and Editors. I am in a hotel ballroom with some of the world’s best journalists, even on a good day a tough crowd.

I start by asking a few questions from the podium.

“How many of you believe investigative reporting is worth much more to society than it costs?” Almost all the hands go up.

“How many believe that the average American — the cashier at the grocery store — understands the true value of investigative reporting?” Only one hand goes up.

“How many of you believe it is your responsibility to explain the value of investigative reporting to society?” Only a third says yes.

There you have it. Investigative reporting is valuable. People don’t understand its value. Yet the journalists (at least most of them) don’t think their job is to explain things.

For at least a century during the age of mass media, journalists convinced themselves that they didn’t need to bother. No one else was doing journalism. They could do it the way they wanted.

But in this networked, two-way world, people are now committing millions of acts of journalism every day through blogs and social media platforms. Journalists could invite them into the professional journalism process. Or they might convince themselves they don’t need journalists anymore.

It comes down to one question: If investigative journalists don’t explain the impact of their work, who will?

We say this as allies. After the media money meltdown of 2008-09, when everyone said journalism was doomed, Knight Foundation announced an investigative reporting initiative totaling $15 million. Including endowments, the figure is closer to $20 million. You can’t spend that much without learning a few things. 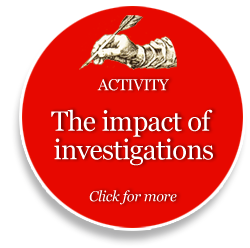 We learned news organizations can go from birth to a Pulitzer with lightning speed; that newly invented open-source document-handling software could be used by hundreds of newsrooms; that nonprofits and for-profits can collaborate and that journalism education has an amazing role in investigative reporting. (Just one example of all this: a major student investigation on the national transportation system that ran on the front page of The Washington Post.)

Today, there are scores of recently born nonprofit news sites. By 2013, more than 80 were members of the Investigative News Network. Many foundations that didn’t care about news and information now fund it.

Though there are fewer journalists in traditional media organizations on the commercial side, we are seeing how new techniques and technologies can multiply investigative powers.

Journalism doesn’t look dead to me.

We’ve also learned something about business. Just because an investigative unit is a nonprofit doesn’t mean it escapes reality. A story by itself does not save the world. It must be seen, understood, acted on and yes, paid for.

We learned the new nonprofit organizations need: content that matters; connectivity, to reach people; a community they’ve engaged, giving them access to cash. I call them the Four Cs — content, connectivity, community and capital.

Tracking the impact of investigative reporting

All impact can’t be reduced to numbers. What you can track, however, shows results that are too miraculous to keep from the public:

I’ve used these examples before. Just three stories add up to half a billion dollars in social impact, plus the priceless impact of lives improved or saved. This suggests a new approach for lawmakers who are interested in deficit reduction. Increase by a hundredfold the number of investigative journalists in America and let nature take its course. 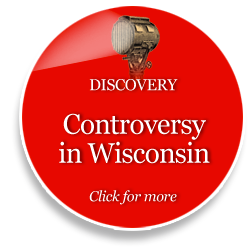 If journalists don’t tell the story of their impact, who will? For every reporter who buys this argument there are at least two who don’t. They fear getting stuck doing only stories with large measurable savings to society.

They also can give real-world examples:

True, not all investigations have measurable dollar impacts. Should that excuse journalists from trying to count the ones that do? If relentless monitoring of the gas drilling industry saves millions (or billions) because we avoid water pollution cleanup, journalists need to add up those numbers. If exposing credit card company abuses saves consumers many millions or even billions, journalists need to tally that as well. And when the numbers aren’t there, but the impact still is, why can’t that story still be told?

ProPublica founder Paul Steiger explained the situation this way: “Where there are clear dollar savings, we should take credit for them. When the success is qualitative, we should rejoice in that.”

Either way, telling this story is up to the journalists. With the many thousands of traditional journalism jobs that have vanished in recent years, too many of them investigative, journalists can no longer say “It’s not our job.” This is a fact-based profession. Fact-based arguments about our value are better than faith-based arguments.

The facts may not be kind to journalism. Even prize-winning journalism can produce no impact. Yet the reasons why a story did not make a difference can be important to know. Was the investigation’s revelation actually old news to the community? Did it pale in comparison to other issues? Was the news organization trusted? Was it engaged with the community? Did it try to get a debate going? Did it follow up on the stories? In the end, did people think their actions mattered, that change was possible? 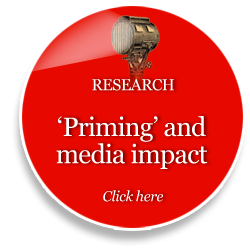 Even if impact is complicated, there are ways to explain it. I’m not saying you should beat your chest and scream “Look what I did!” I’m saying you should report how a piece of news was revealed and spread and what the community did about that. Shine your light. Then come back later and provide some shades of meaning. Investigative reporters are good at that on other stories, and telling this story — the story of the role of journalism — greases the machinery that produces the other stories. If journalists can more clearly communicate their dollar value and their even bigger social value, the wheels will turn. Raising money should be easier; cutting budgets should be harder. On the whole, the future of investigative reporting will be brighter. Journalists may not like to crow, but these days, they better at least tweet.

At ProPublica they do much more, following story results regularly and issuing reports on how to track investigative impact. This sort of thorough accounting suggests that as journalists become good at following up, at explaining why their stories mattered, academia may get better at it as well. Certainly improvement would give the News Literacy Project a lot of good material.

You don’t have to be the size of ProPublica to do this. I’ll do it myself by going behind the scenes of a story you may have heard me mention before. In 2007, on a street corner, Oakland Post editor Chauncey Bailey was killed by a man with a shotgun. The reason: To stop him from investigating strange dealings at a local bakery. 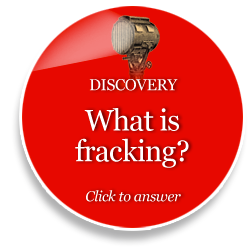 Knight Foundation gave the Maynard Institute for Journalism Education a $125,000 grant to create the Chauncey Bailey Project, an investigation that included nonprofit journalism, commercial journalists and student journalists from all media. Call it an experiment in collaboration. It was a bumpy ride, but it turned out to be a prototype for what the Center for Investigative Reporting did later throughout California and the nation. That’s because Dori Maynard at Maynard Institute, Robert Rosenthal at Center for Investigative Reporting, Sandy Close at New American Media and Martin Reynolds at the Oakland Tribune — and many others — made it work.

The journalism revealed Chauncey’s murder was part of a pattern of murders, kidnappings and other crimes. It identified the trigger man, an accomplice and the mastermind. In addition, after the journalists revealed that police had delayed a raid that could have prevented the murder and then tried to cover it up, the police chief resigned.

The man who ordered the murder of Chauncey Bailey was guilty. So was his accomplice. They’re looking at life without parole. The trigger man, who flipped on them, got 25 years.

Did the Chauncey Bailey project have impact? District Attorney Nancy E. O’Malley said this: “The investigation and prosecution of these violent crimes has been a top priority of my office … With today’s verdicts, justice was served, and we hope that the outcome will provide some closure to the families of the victims … These verdicts also stand for our abiding conviction that violence against the free voice of the press will not be tolerated in our society.”

The prosecutor continued: “I would especially like to recognize and acknowledge the Chauncey Bailey Project which worked diligently and tirelessly to ensure that the defendants responsible for these senseless murders were brought to justice.” 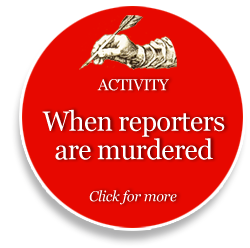 Here is the bottom line: a $125,000 grant; a new model in investigative collaboration, three convictions; police chief resignation; and press freedom and justice upheld. Money well spent; a story of impact, not just told to a room full of investigative reporters but also blogged, tweeted, put out there in speeches and in letters. We should keep telling these stories until we have found a way to show everyone how good journalism matters, including that clerk at the grocery store.

This is an edited version of a luncheon talk delivered at the annual convention of the Investigative Reporters and Editors.