Traditional news media have made a destructive mistake by encouraging anonymous comments on their websites. But this bad idea can still be eliminated. The 2012 election — probably the greatest digital political event in American history — would have been the perfect opportunity to change things. Yet another opportunity that slipped away. The election turned out to be one of the nastiest, most negative and least factual ever. (The Wesleyan Media Project reports presidential election ads on television were 70 percent negative in 2012, up from 9 percent in 2008.) 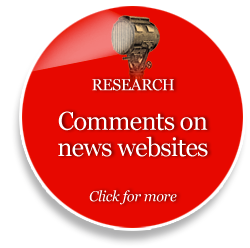 Anonymity brings out the beast in us. Steven Clift, founder of E-Democracy.org, has a long experience with political debate, which has led him to two simple rules: real names and no name-calling. Letting your comment section turn into a sewer weakens the reputation of a newspaper or any other fact-based business. What’s more, allowing it is just unethical. Professional journalists grant anonymity to sources only when there is no other way to get important information. That same ethic should apply to newspaper Web comments. Only leakers should be anonymous. I’ve been arguing for years that the Society of Professional Journalists code of ethics, untouched since the Web took hold, should be updated to deal with our digital dilemmas. The Poynter Institute is on the right track with its event on “the new ethics of journalism” and the book by the same name. 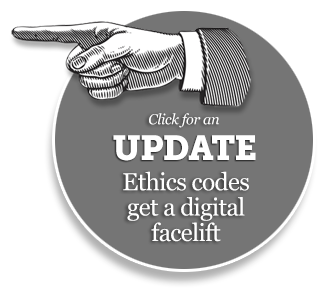 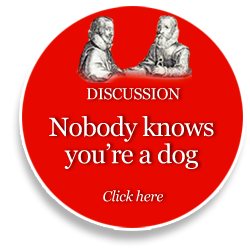 Anonymity doesn’t need help. MIT Center for Civic Media director Ethan Zuckerman talks about the graphics of “the political blogosphere.” Actually, there are two spheres: a liberal sphere and a conservative sphere. Only a tiny center wants to link to people of both persuasions; the rest of them just want to sink into their comfortable cocoons. Traditional media used to think they could provide the bridge between the factions. My mentor, Bob Maynard, said those bridges should be “structures of integrity” — held together by facts, civil discussion, real people using their real names to make constructive and useful comments, being able to withstand social earthquakes because, with mutual respect, they would bend and not break.

Clift’s post, “Civility Online: Why are you hurting America?,” hopes media leaders will wake up. As he has noted: “Major media made a huge mistake when they bought into the idea that ‘no one knows you’re a dog online’ was a good thing. Now they are throwing up their hands wondering why the jerks they are empowering by design are acting like animals.”

Real people, real debate, real democracy. Some newspapers, radio and television stations already are moving in this direction, using Facebook for commenting or requiring registration to post comments. We can add millions of new facts to the next election cycle with one simple decision: go with open, transparent, civil debate. Go with real names.

After this Knight Blog post, the nation’s largest newspaper group, Gannett, switched to Facebook registration for Web comments. The McClatchy group and others followed; even The Huffington Post said it would switch. But some mainstream brands, and many younger and alternative brands, are staying with anonymity.