Where there are people, there’s news. And where there’s news, there are journalists. Why? Because open societies have learned that when professionals make it their business to look at the world as it really is, we all benefit.

Just three stories, with a social impact of more than $500 million. The cost of producing the stories? About a thousand times less than that. Such is the value of watchdog journalism. 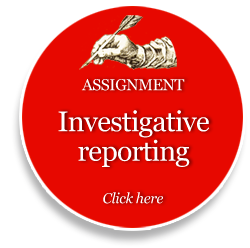 Doing stories that keep government honest is still a big part of the modern role of professional journalism. Where the press is free and plentiful, corruption is low. But there are new roles for journalists as well.

The examples above were reported with nonprofit news organizations. One, ProPublica, won, in its first year of existence, a Pulitzer Prize. In its second year, it won another. Forming new kinds of news organizations is part of a modern journalist’s role.

The stories shared above were collaborations. News people chose to partner rather than compete. For-profits and nonprofit groups — worked together. Collaborating — including tapping the wisdom of the crowd — is now part of a journalist’s role. To mine, curate, verify and clarify data is part of our role.

With these new tools we need new ethics. Do our 21st century responsibilities extend to an ethical obligation to be both transparent and interactive? I think so. Transparency, like the use of objective tools, serves the basic idea of fairness. Interactivity, like the use of multiple sources, serves the fundamental value of accuracy. Keeping ourselves honest, current and transparent is part of our role.

If we fail to engage the next generation we lose them — and our future. So some universities are teaching more than storytelling. Their students learn how to create and run media companies; how to work with computer scientists to invent new ways to produce, curate and deliver stories; how to create cultures that support change, and how to interact with communities. Supporting good journalism education is part of our role.

Today, anyone on the Internet can create news, pass it along, critique it. We must tell the story of how people need reliable news and information to run their communities and their lives. We should tell people more about how and why journalists do what we do. Promoting media literacy in the digital age is part of our role.

Today, journalists can be citizens. Stories can be databases. Media can be smart phones. Audiences can be interactive. Redefining our role is part of our role.

Telling the story of journalism’s impact

Professional journalists matter. We are as important as ever. We know we are a force for good because all over the world evil people try to kill us. In Arizona, we found a powerful approach to the murder of journalists in 1976, when a car bomb killed Arizona Republic reporter Don Bolles. Dying, he whispered the word “mafia.” Journalists came from all over to create the Arizona project. They finished Don’s work. His murderers went to jail.

Those journalists went on to form Investigative Reporters and Editors, a professional group thriving today with many thousands of members.

A generation later, in 2007, when a man with a shotgun killed Oakland Post editor Chauncey Bailey on a street corner, we knew what to do. Finish the story. Find the killers. Journalists in California created the Chauncey Bailey Project. They came from all forms of media. They finished Chauncey’s story about the shaky finances of a local bakery, tying it to killings and kidnappings. Three criminals were jailed, two for life. Oakland’s police chief resigned after reporters revealed that police had planned to raid the bakery, but delayed it. Then they covered it up because that raid would have saved Chauncey’s life.

In the summer of 2011, the verdicts came. The man who ordered Chauncey’s murder and his accomplice are guilty: Life in prison, no parole. The man who pulled the trigger confessed and got 25 years. Prosecutor Nancy O’Malley said, “I would especially like to recognize and acknowledge the Chauncey Bailey Project (which) worked diligently and tirelessly to ensure that the defendants responsible for these senseless murders were brought to justice.”’ She said, “violence against the free voice of the press will not be tolerated in our society.”

Ensuring that murderers go to prison is part of our role.

Is our role too big? Is it too much? Hardly. Today, an individual journalist can do more than ever. Our profession is limited only by our own imagination — and our courage.

The original version of this speech was presented in Moscow at the second meeting of the sub-group on media, part of the U.S.-Russia Bilateral Presidential Commission.