Digital tools can open up newspapers

To improve print, we must think digital. We need to use the new tools, even in traditional newspapers, to include our communities in our task of covering the news.

This is true whether you are working in the east, where, like the sun, printed newspapers are rising, or in the west, where they are setting. Digital tools make print reporters a hundred times more readable and relevant than they were in the last century.

We hear a lot about the digital delivery of news. Digital delivery is great: it allows newspapers to provide audio and video. It saves money. It gives editors infinite space and instant timing.

Yet using digital technology only to deliver the news is a horrible waste, sort of like using a space shuttle to drive to the corner store. We must stop sticking digital on the end of the industrial age mass media assembly line and calling it a day. It’s a totally different, interactive medium. To succeed, journalists can’t just be on the web; we must be of the web.

Used well, digital tools help us decide what to cover and give us new ways to cover it. The early adopters use them throughout the news process, to crowd-source, to analyze data, to find facts fast. For them, digital news collection is just as important as digital news delivery.

There is no dearth of tools. Some of them come from the Knight News Challenge, an open contest anyone can enter. The challenge shows we can all experiment. Even if the projects don’t take off, we learn, and try again, smarter, as we search for a future where technology and truth can co-exist.

A good example is Spot.Us. The brainchild of a young graduate of New York University, it demonstrated the next evolution of crowd-sourcing. On this website, freelance journalists present the stories they would like to do. People pay small amounts of money to fund the stories they would like to see done. When those small amounts add up, the reporter does the story. If it’s good enough, with permission of the participating news organizations, the story appears online, on air or in print. It’s beyond crowd-sourcing, it’s actually crowd-funding.

So why is this better than traditional ways of paying for stories? It engages your community in helping establish a news agenda. It doesn’t allow the community to drive the news, but it does invite people into the car.

One famous example of the use of Spot.Us: a journalist wanted to go to the Pacific Ocean to do a story on a gigantic patch of garbage floating around the Pacific. She was a professional freelancer. The New York Times said they would be happy to print the story. But times are tough, and they didn’t want to pay the $10,000 she needed to get into a 50-foot catamaran and sail the world’s largest ocean looking for garbage.

So a hundred people used Spot.Us to donate to her story, all kinds of people, even well-known digital names like Pierre Omidyar and Craig Newmark. In the end, freelancer Lindsey Hoshaw got to go out and find the giant trash patch. The New York Times published the story and photos. Since then, hundreds of other stories that newspapers would not have been able to afford otherwise have been done through Spot.Us.

The Spot.Us platform didn’t become a household name. But it proved the concept. A crowd can fund a story idea and a major newspaper can print the story, and the earth will not open up and send the reporter and editors into the flaming pit of journalistic perdition. The crowd-funding platforms that came later — Kickstarter, Beacon and others — were variations on that theme. Together they have funded millions of dollars in journalism. Even public broadcasters began experimenting with the idea of asking people to fund specific stories rather than their institutions. People, it turns out, are willing to pay for journalism that 1) they want and 2) can’t be had for free.

In the global context, think of how a Diaspora community in the west or north might pay for stories in the newspapers or websites they count on from their home countries.

How many stories do you wish you could do, but can’t afford? Are you willing to try crowd-funding?

Next, look at Ushahidi, another early news challenge winner. Developed in Kenya, Ushahidi allows journalists to reach out to any community that has cell phones. Citizens text news to a digital site that collects and displays it. Say it’s an election day. You’re looking for problems at polling stations. You ask your readers to text in what they see. Their reports are collected on an interactive map. You can instantly see where your community is reporting problems.

What is the Ushahidi Platform? from Ushahidi on Vimeo.

These maps are used in more than 100 countries for anything you can think of, from reporting on disasters to stories of crime and corruption. Its founders have moved on to other ideas, like Swift River, trying to create technology that helps filter falsehoods from the digital stream.

A more detailed kind of crowd sourcing can be done with Public Insight Journalism. The creation of American Public Media, it allows you to seek volunteers from your community willing to share their expertise to make the news better.

The Miami Herald, for example, has recruited nearly 10,000 people to be in its Public Insight Journalism network. People give their contact information. A data steward takes care of the database and training journalists how to use it. Here is an example of how it works: reporters were looking for a recording of a controversial political advertisement that had been delivered to voters by telephone. No one in the newsroom knew anyone who had a copy of the “robo-call.” They asked the public insight network. In 10 minutes, they had the recording.

The Herald, like many major newspapers, has less than half the newsroom it once had. But if papers in that situation are willing to devote just one person to building a public insight network, they can replace the lost journalists with many thousands of new contributors.

Next, let’s look at the innovation each of us is carrying right now. When I was a young print reporter, I hauled around a tape recorder to make sure my interviews were just right. Over my shoulder I lugged a camera. But today I can do all that with one device — my phone. The group Mobile Active has produced a mobile media toolkit for both professional and citizen journalists. A smart phone can be used as a recording studio, a camera, a map, a library, a telephone, a printing press, a telegraph — and a lot more — the history of journalism technology fits in the palm of your hand. Just one example: Journalists are now tweeting from government meetings they’re covering. You tweet the notes and quotes. This generates interest in the story before you write it.

But most newspaper journalists don’t do that. They haven’t tweeted in the right ways because they tend to think of Twitter as just another newsboy, hawking the paper on the streets. Write a piece, tweet the link. But that approach won’t grow your Twitter followers, says our former journalism vice president Michael Maness, frequent speaker on social and mobile media. Maness says many types of tweets are needed to engage a community: You need to beat the drum in advance of a story, ask questions to help you do the story, complement good comments, and yes, send out links.

A generation ago, reporters had little to do with charts and graphs. They often were done in an entirely different part of the newspaper. Before the personal computer, they were usually done by hand and difficult to change. The opposite is true today. Data journalism has come into its own, and ways of displaying that data are finally beginning to be seen for what they are: stories.

Audio stories are now told without the help of the radio. Podcasts such as “Radiotopia” are heading into somewhat of a golden age thanks to shows such as “Criminal” and “Serial.” You used to need a professional studio and equipment to create quality sound pieces, but now all you need is your personal computer and a story to tell.

The digital age brought us the era of Big Data. Today, rank-and-file journalists should be able to do their own charts and graphs. A new suite of data visualization tools — timelines, maps, motion charts, pie charts — allow us to communicate a maximum amount of information in a minimum amount of time. A variety of tools, from open-source, Drupal-based Vidi to Open Street Map, are free and ready to use.

This raises a serious question about the education of journalists. For centuries, we have been, for the most part, writers. Artists, photographs and videographers were seen as specialists and proportionately few in number. The rest of us wrote. We were word people, as a rule not good at math. But today, when a clickable map, a database or an algorithm can be a story, we need journalists with numeracy. On top of that, the new age has raised the importance of both still photographs and video. The word people now must become word people, numbers people and visual people.

That leads me to the greatest digital tool of all — education.

News University is the world’s most successful online journalism school. It’s based at the Poynter Institute, the best journalism training organization in the United States. NewsU has more than 250,000 registered users, and without any international promotion, a third of them come from all over the globe. Journalists in Asia, in the Americas, in Africa all want training so much they found their way to News University.

There are classes for everyone — top managers, photographers, reporters, citizen journalists. They have classes in how to use digital tools, how to interview, photograph, write, understand specialty beats. All the things journalists do. And many of these classes are free. So here’s a question for editors: how many of the journalists in your newsroom need a little more training?

We’re willing to go the extra mile when we’re chasing down stories. Can we muster even a fraction of that courage to give ourselves permission to change much faster than we’re changing now? Can we embrace a learning culture, a culture of continuous change? 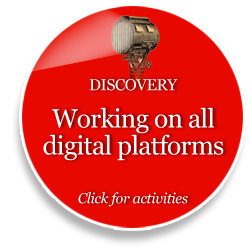 The basic devices we’ve talked about are only the beginning, as is using them in traditional ways, to find stories that shed light. There’s an entirely different level of tool we need to learn next. Software and even hardware that people can use to get their own stories, like the portable radiation detectors that contradicted what the Japanese government said about danger in the wake of the recent nuclear meltdown. Those tools that are more like sunglasses than searchlights. They help us filter meaning from the rising tide of information.

Education matters. If you take just one thing away from this discussion, I hope it’s this: newspapers can’t improve their print products without going digital, and they can’t do that without establishing a culture of continuous change, a learning culture, in their newsrooms.

This is an updated version of a talk originally given in Vienna, Austria, before the World Editors Forum at the annual meeting of the World Association of Newspapers.