Our great political scientists may not agree with this, but perhaps a few other scholars might want to take a look. From George Mason University, via Wikipedia, the graphic above shows presidential election turnout in the United States for the past two centuries. 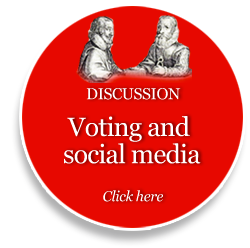 There are four notable upward spikes in U.S. election turnout: 1820s-1850s, which coincides with the rise of the mass circulation newspaper; 1920s-1940s; which matches the rise of radio; 1950s-1960s, matching the rise of television, and the mid-1990s to today — the rise of the World Wide Web and digital media. (Plus two mini-spikes in presidential voting, after the Civil War, when the American illustrated magazines rose, and just before the turn of the century, when big city papers rose.)

Connecting the early press to engagement

In his book The Creation of the Media, Pulitzer Prize-winning Princeton scholar Paul Starr argues that in the early 19th century, there was a tight relationship between political activity and newspapers. The first political parties inspired “party newspapers,” which accelerated the growth of the penny press, making newspapers cheap for all, which accelerated party activity, and so on.

Alexis de Tocqueville, the French political thinker who studied America in the early 19th century, wrote, “If there were no newspapers there would be no common activity.” Our great poet Walt Whitman said: “America is a newspaper-ruled nation.” Abraham Lincoln, as a young postmaster, read newspapers from all over the country, using them to master America’s emerging democratic language, a speaking style that interested people across the sprawling country.

In the 1920s to the 1940s, during the rise of radio, the second major spike in presidential voter turnout occurs. Many would say it’s because women got the vote in 1920. Others would say it was because of the big issues of the day, such as the New Deal. Others might say President Roosevelt’s radio-broadcast fireside chats played a role. What if it was all these things? A new group of voters exposed to big issues and a president’s message coming into the home via radio news?

This is the chain of events that could make the rise of a major new form of mass media an ingredient in a presidential voting spike:

1. Because the emerging medium is new, a lot of Americans pay attention to its novelty, including some who don’t normally vote;

2. Since the new medium carries news, the pool of people aware of that news, including political news, increases;

3. Some people who didn’t talk about politics before start doing just that;

4. Savvy politicians realize they can use this new media to increase turnout by targeting potential voters;

7. It only works for a few elections, because eventually, the rising medium is no longer novel, and the pool of potential voters settles back to normal.

Can I prove any of this? Not a word. It is a hunch. Yet isn’t this pattern just too odd to be a total coincidence?

Columbia University Sociologist Michael Schudson says that scholarship suggests the rise of TV and the Web is linked to greater political interest, but that it is still in the realm of theory.

We are experiencing the fourth big spike right now so it’s a good time to study the rise of presidential voting, particularly among the young, and the emergence of digital media, popular among the young. The first version of this article was posted on Knight Blog before the 2012 election, and I predicted then that voter turnout might again increase or at least youth voting. In fact, the youth vote, as a percentage of total vote, increased one percent in 2012, surprising the experts.

The hunch that emerging mass media forms, new and on the rise, can make a big difference, came out of a talk I gave at Arizona State University, showing that every American generation has grown up with a different form of media on the rise. My hope was that the talk would help today’s journalism students seize the day and relax into new information delivery worlds such as this one.

Could social and mobile media keep presidential voter turnout soaring? Probably not. But the new forms keep coming faster and faster. Who knows what the next wave will be, and which presidential candidate will rise up to exploit it?