As journalism funders said in their open letter, journalism and mass communication schools that don’t change risk becoming irrelevant to the more than 200,000 students and the 300 million Americans they seek to serve. Without better-equipped graduates, who will deliver the news and information of the future?

Foundations noted the digital age has disrupted traditional media economics, and that in America today, there is a local journalism shortage. Thus, the “teaching hospital” model of journalism education — learning by doing in a teaching newsroom — seems promising.

In this model, students, professors and professionals work together under one digital roof to inform and engage a community. They experiment with new tools and techniques, informed by research and studied by scholars, in a living laboratory.

The funders didn’t think the letter was controversial. Yet both the Chronicle of Higher Education and Inside Higher Education covered it as such, and the journalism educators’ convention and the listservs buzzed.

Some educators said there was no need to talk of change, that they’d already done it. But that would be impossible. We’ve entered an era of continuous change. If you changed last year, you’re a year behind. If you went digital in 2002, you’re more than a decade behind. The “we-have-changed” group includes those saying that their PhDs started out as professionals, not realizing that people who cut their teeth on last century’s newsrooms are not the digital pros we need to recruit for teaching hospitals.

Others said the funders cared only about gizmos, not content. Yet smart phones, social media and the Web are no more “gizmo” than the printing press was. They are driving a global revolution in digital content. For the first time in human history, billions of people are walking around with digital media devices linked to a common network. University programs should not claim to be digital when they aren’t using social and mobile media for news and information.

Then there are those who say they have created “teaching hospitals” when, in fact, they have not. The professional journalists are the doctors of these hospitals; the academics are the researchers; the students are the interns and residents. They diagnose and treat with stories and forums for debate. But for a teaching hospital to be complete, you need “patients.” That means not just providing real news to real people but engaging the community to be served. Students should have the experience of finding out what a community wants covered; of soliciting a community’s help in reporting; of seeing scores of comments on their stories, of finding out if the community does anything with the news, whether that news has impact. The journalism programs that claim to be “teaching hospitals” are not engaging their communities. They are hospitals without patients.

Some professors said it was “anti-intellectual” to criticize current research and call for more useful studies to help us understand the technique, technology, and principles at work in this new age. When we asked about major breakthroughs their theoretical papers had produced, or even who funds them, they fell silent. Looking back, it seems that was not the best way to start a conversation. So let’s recast the question: Can we agree we need more research that helps us understand the science of engagement and impact?

College presidents from places like Western Kentucky, Washington State, and Florida International University supported our letter. Mark Rosenberg of FIU, for example, said the “teaching newsroom” is central to his new dean’s vision. It’s good to know that Rosenberg wants to build a new Media Innovation Complex (a new facility was a boon to Arizona State).

Two schools said they were looking at creating professional-track PhD programs. One is looking at creating a guidebook of best practices by the deans and directors who are good at getting tenure for top professionals. Columbia University’s guidelines are good ones. And the Accrediting Council on Education in Journalism and Mass Communications updated its standards to reflect the need for current technology and, more than that, for every student to understand the digital world.

Innovative faculty, especially younger professors, feel enthusiastic. A group of them gave a standing ovation to Richard Gingras, head of Google’s news products, when he spoke at a recent journalism education convention. These are the faculty applying for micro-grants to employ Knight News Challenge tools on their campuses.

We’ve said it before but it bears repeating: The digital age has changed almost everything about journalism: who a journalist is; what a story is; which media provide news when and where people want it, and how we engage with communities. The only thing that hasn’t changed is the why. In the digital age, good journalism (and communications) is essential for peaceful, productive, free, self-improving societies.

The best schools realize that having top professionals on hand is as important as having top scholars. “Top” is the key word: Quality today does not mean a long career or a famous name. It means you are good at doing what you do in today’s environment. You don’t have to be a big school to make a difference. Look at Youngstown, Ohio, where students are providing community content as though they were attending Berkeley, USC, Missouri, or North Carolina. 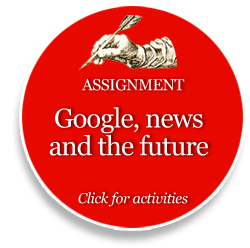 There are hundreds of hard-working deans and directors, applied researchers, sharp professors, growing numbers of digital innovators, and creative agents of change. Look at what Dan Pacheco is doing at Syracuse University, for example, or Jeff Jarvis at CUNY. To you, we say congratulations. Keep changing. We need you to keep trying new story forms; to teach data visualization; to do computational journalism; to develop entrepreneurial journalism, build new software, and even pioneer things like drone journalism. We need you to keep learning from your students, the first generation of digital natives, as fast as you teach them.

“Each and every person in this room”

No institution within journalism education has achieved all that can be achieved. Some big pieces are still missing. For example, journalism and communication schools could be some of the biggest and most important hubs on campuses. They could become centers for teaching 21st century literacy — news and civics literacy along with digital media fluency — to the entire student body. They could, but with only one or two exceptions, most of them aren’t.

The News21 project at Arizona State shows what’s possible in journalism education and why it’s important. The project’s 2012 investigation found only a tiny number of cases of voter fraud and raised questions about the tax-exempt status of the nonprofit organization that helped push states to enact voter ID laws when there wasn’t really a fraud problem. Everyone from Jon Stewart to The Washington Post used the stories. This is student work, journalism education at its finest. As Gingras said at his talk at the journalism education convention in Chicago:

“I believe we are at the beginnings of a renaissance in the exploration and reinvention of how news is gathered, expressed, and engaged with. But the success of journalism’s future can only be assured to the extent that each and every person in this room helps generate the excitement, the passion, and the creativity to make it so. May you enjoy the journey, and more importantly, might you inspire others to enjoy theirs.”

This is an edited version of an article that first appeared in Harvard’s Nieman Journalism Lab.